It’s no secret that summer is 100% my favourite season. I live in the Pacific Northwest and from July to September I am deliriously happy. Beaches. Mountains. Festivals. Islands. Lakes. Vineyards. Just take a look at these pictures and try to argue the greatness. I dare you.

Unfortunately, the aftermath of this obsession with summer is the inevitable fall hangover. While many of my friends are excited to pull on cozy sweaters and tall boots, all I’m thinking about is shorter days, excessive amounts of rain, and how it will be a long 9 months before my beloved summer returns from hibernation. #firstworldproblems

Well… I’m happy to announce that I’ve found the cure for my autumn blues and the answer lies approximately 5000 km east in New England where October and November are magical months of glorious foliage – all golden, orange, and red.

Earlier this month I was able to visit my friend Megan in her adopted home of Boston, Massachusetts and finally figured out what all the fuss is about. Since downtown Boston is actually quite small, we were able to explore most of the sights on foot. With perfect weather and minimal crowds, we soaked up the breathtaking colors, expansive public spaces, and historical sights with ease.

As someone mildly interested in athletics… I was very curious to see the now infamous street where the Boston marathon takes place each year. After the tragic bombing two years ago, the site has even more meaning than ever before.

I have a sweet spot for libraries (VPL is one of my favourite buildings) and my visit to the BPL’s central branch was no exception. Established in 1848, it is the second-largest public library in the United States with approximately 23 million items. That’s a lot of books! We arrived just as the library was opening which afforded me the chance to scurry up to Bates Hall for a rare photo op sans people. Thought by many to be architecturally one of the most important rooms in the world… I just thought “how pretty!”

I also decided to be super classy and straddle the lion statue… sorry mom. 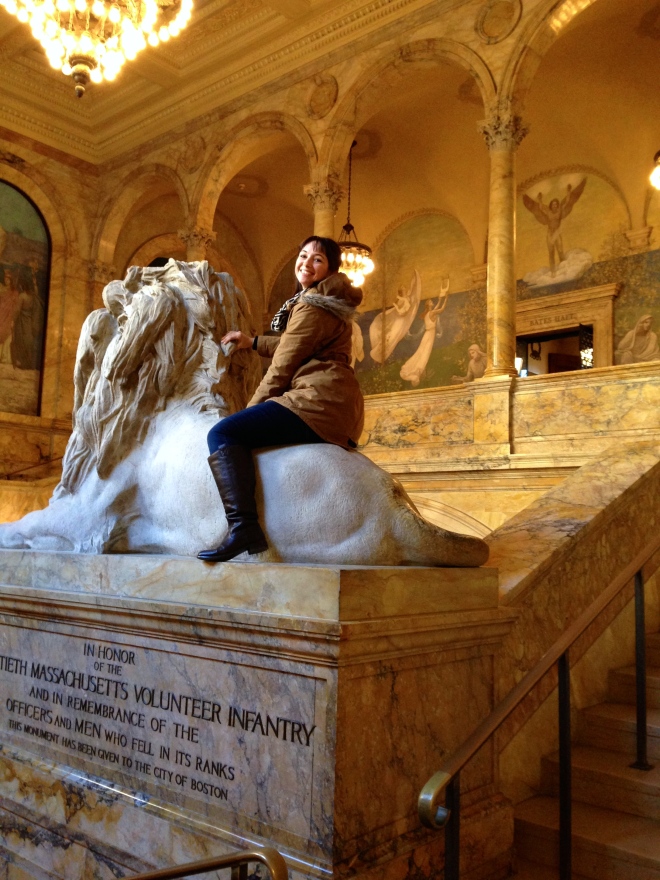 The Public Garden was the first public botanical garden in America. With a gorgeous lake, commemorative statues, picturesque bridges, and lovely walkways, I could have happily wandered the grounds all day. 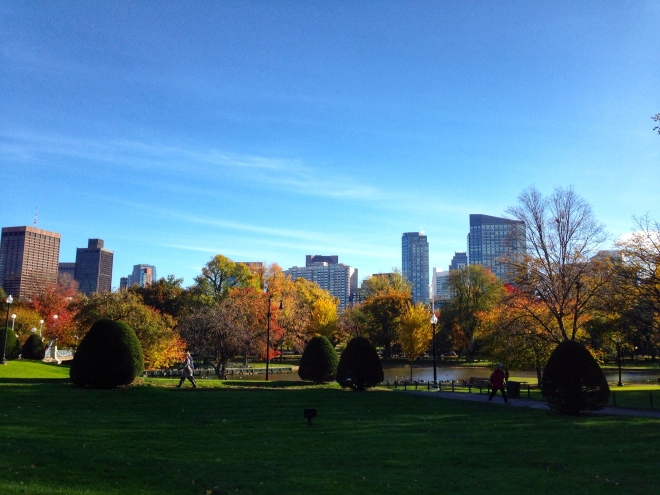 Located just beside the Public Garden is the Boston Common, America’s first public park, created in 1634. 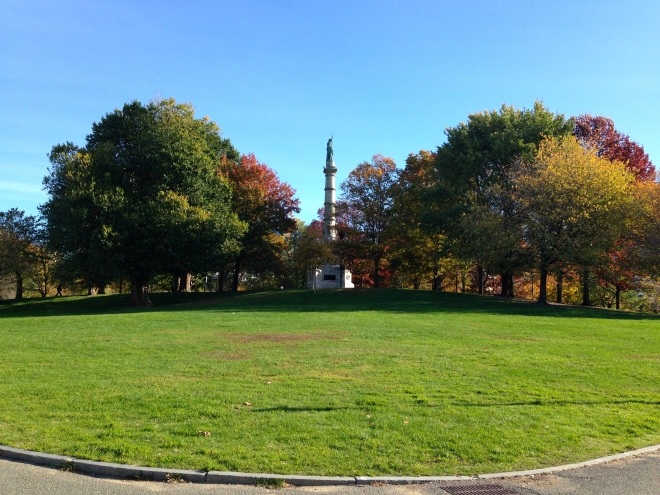 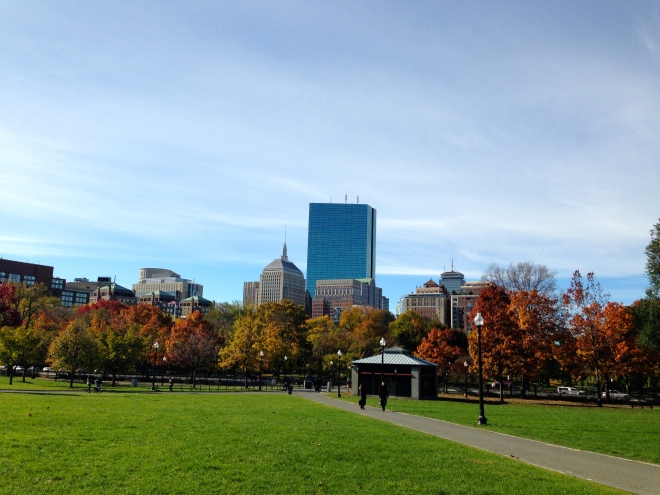 The Massachusetts State House is the state capitol and house of government of the Commonwealth of Massachusetts. My first question for my tour guide, Megan, was “is the dome made of real gold?” Apparently, there is a long history with the dome; it changed from wood to copper due to leaks. And the color has transitioned from gray to yellow to black to prevent attacks (something to do with being reflective?). But to answer my question… Yes. In 1997, at a cost of more than $300,000, the dome was re-gilded, in 23k gold. Wowza!

Founded in 1660, the Old Granary Burial Ground is the third-oldest cemetery in Boston. It also happens to be the final resting place for many notable Revolutionary War-era patriots, including three signers of the Declaration of Independence, Paul Revere, and the five victims of the Boston Massacre.

Faneuil Hall has been a marketplace and a meeting hall since 1742. Now it is a popular stop on the Freedom Trail and part of a larger festival marketplace, which includes three long granite buildings called North Market, Quincy Market, and South Market. Essentially it’s  an indoor/outdoor mall and food eatery extraordinaire! This is where I was able to devour a gigantic bread bowl of the famous New England clam chowder. 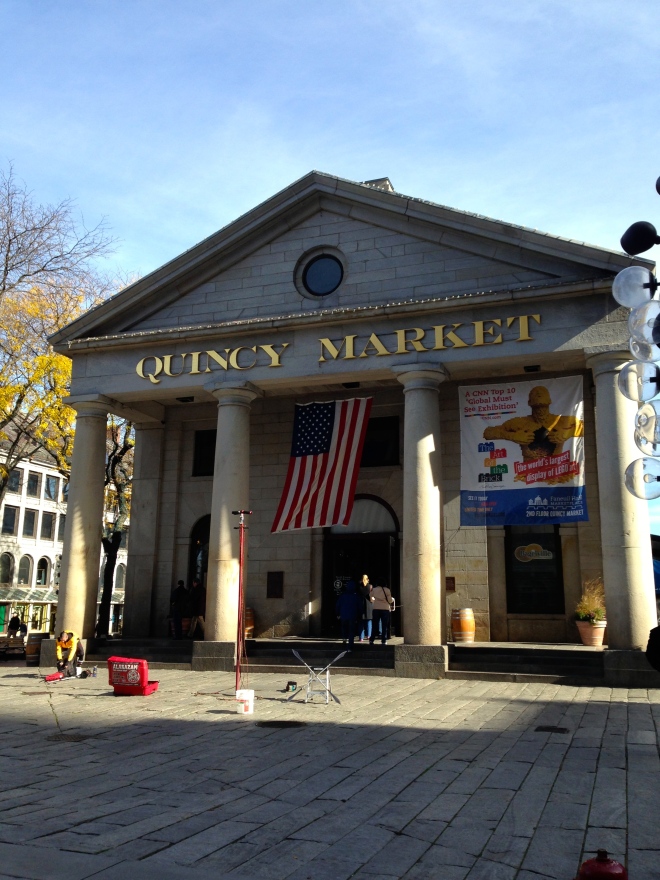 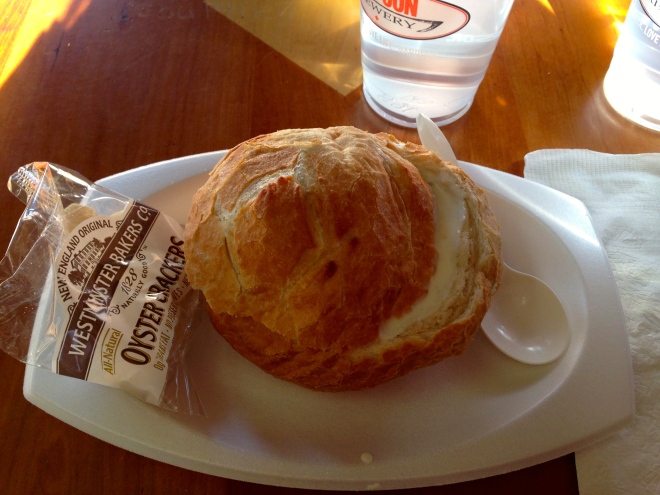 This was way more delicious than it looks.

This historic neighbourhood has the distinction of being the city’s oldest residential community where people have continuously inhabited since it was settled in the 1630s. Predominantly Italian American, I made it a priority to savour a life-changing, espresso-flavoured cannoli from Mike’s Pastry. 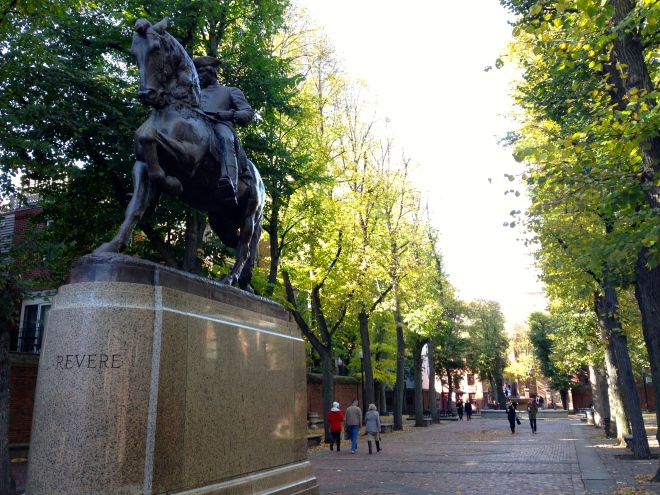 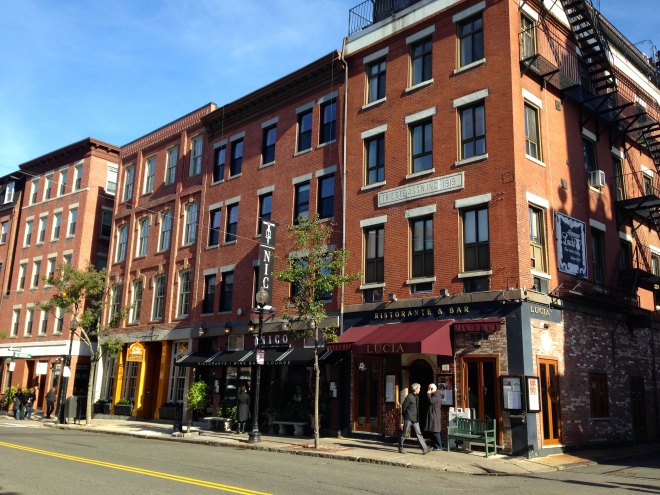 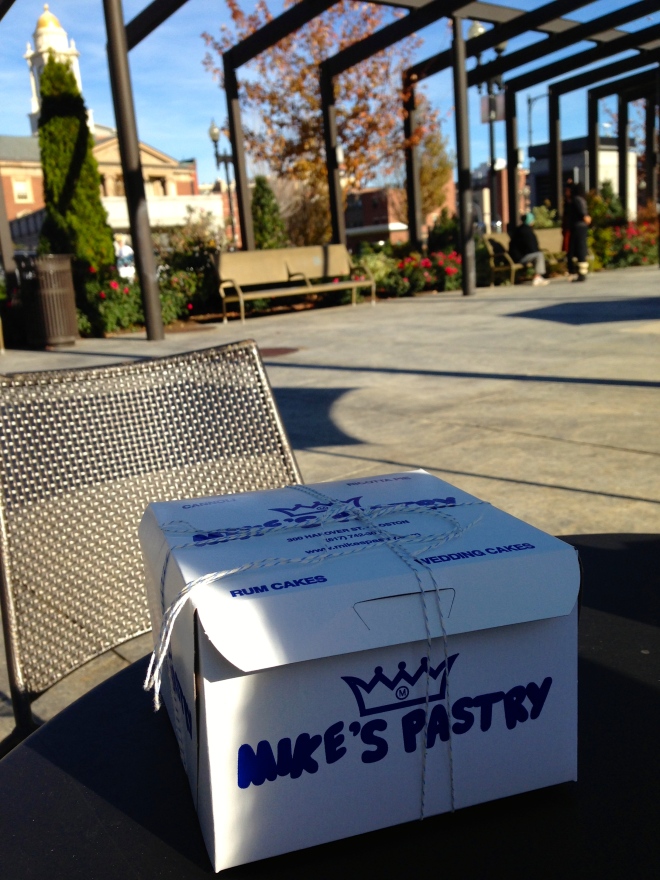 If there’s one thing that Boston could be known for, it would be sports. Fenway Park is home to arguably the most famous sports team in the world, the legendary Boston Red Sox baseball team. For over 100 years, fans of America’s pastime have been flocking to Fenway to watch players from Babe Ruth to David Ortiz in the hopes of bringing home the World Series championship. 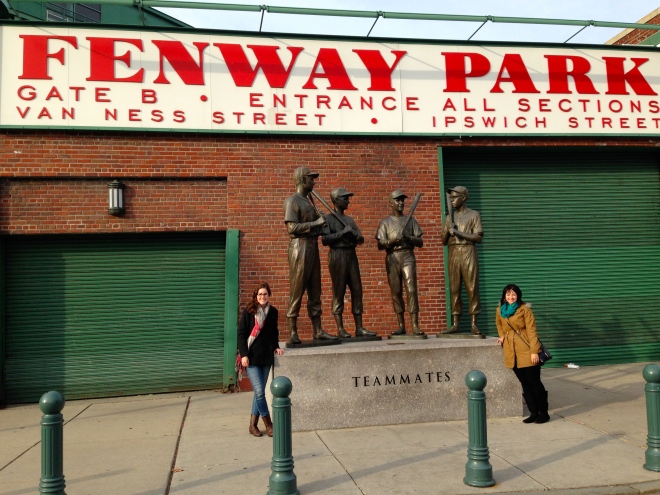 I was able to take a beautiful walk across the Harvard Bridge (also known locally as the MIT Bridge, the Massachusetts Avenue Bridge, and the “Mass. Ave.” Bridge) at sunset, enjoying stunning views of the Charles River. What’s more interesting than the view though is the strange measurements I noticed along the sidewalk. It is locally known for being measured, inaccurately, in the idiosyncratic unit of length called the smoot. The smoot is a nonstandard unit of length created as part of an MIT fraternity prank. It is named after Oliver R. Smoot, a fraternity pledge, who in October 1958 lay on the Harvard Bridge and was used by his fraternity brothers to measure the length of the bridge. I will seriously never understand this whole Greek system. 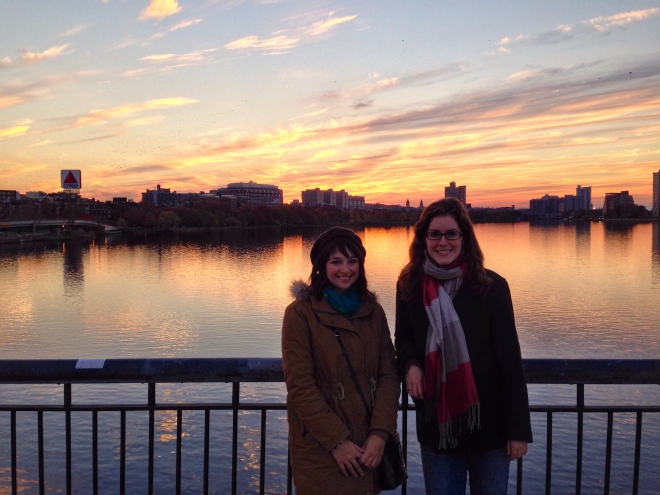 I could in no way become an expert on Boston in one long weekend visit, but I certainly know that this is a part of the world that I want to explore more in depth.

Next up: Harvard University

2 thoughts on “The Best of Boston: Autumn in New England”