Dubai is an opulent, extreme, chaotic, futuristic, traditional, one-of-a-kind destination that I had personally been dreaming of visiting for over a decade. When I finally got the chance to visit on a 4 night stopover on route to South Africa, I was beyond excited to finally experience this adult Disneyland for myself.

As a total travel nerd, I was also pretty excited about finally flying on Emirates airlines, which is consistently ranked as one of the top airlines worldwide. My 15 hour flight from Seattle to Dubai was fine, all things considered, but it definitely doesn’t take the top spot on my personal airline list (Air New Zealand, be still my heart).

When I finally made it to Dubai, I headed straight to my luxury 5 star hotel which was way cheaper than the Vancouver hotels I’m used to. That really is one of the major pulls to Dubai for so many… this affordable luxury in such an exotic setting. I mean waking up to an infinity pool with sea views… not too shabby. 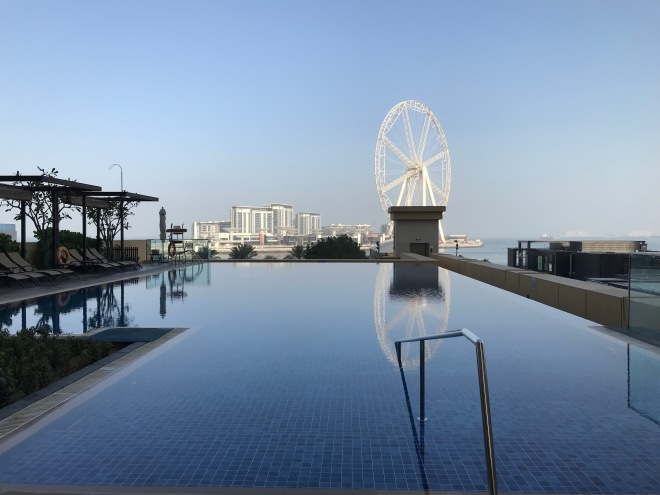 I hit the beach early to beat the heat and the crowds and enjoyed near solitude until 10:30am. In mid-March the water was still chillier than I expected considering how warm it gets during the day but it was the perfect setting to relax and get set for somer serious adventuring.

After the beach it was time to move on to my next activity… Dubai Miracle Garden. 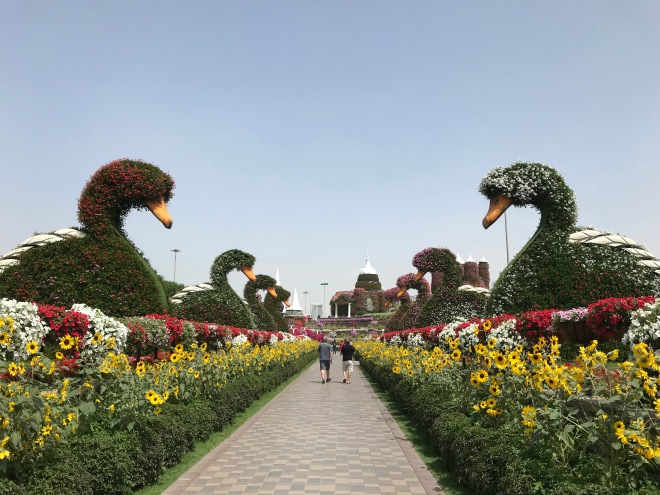 Honestly, this was a bit of an impulse decision because I hadn’t really planned to trek out of downtown. Picture a theme park of flowers and you’re starting to get a sense of the incredible Miracle Garden with over 150 million blooms arranged in every way imaginable and some that I never would have dreamed such as the Guinness World Record floral sculpture of an Airbus A380. Again, the travel nerd in me thought it was pretty cool to see such a massive aircraft up close and personal. The park was not overly crowded and I was able to find lots of quiet spaces to enjoy the scenery.

After my time at the gardens, I had just enough time for a quick change at the hotel and then I was off to the desert to go dune bashing (riding over the sand in a 4×4) and for a sunset dinner at a Bedouin camp complete with henna tattoos, BBQ dinner and entertainment. The thrill seeker in me absolutely loved riding over the dunes and I’m really happy I didn’t research the safety record in advance. I’m sure it was totally fine. The evening entertainment was honestly a bit tired and the food was nothing to write home about, but I ended up befriending a couple on my tour and they shared a bottle of champagne with me so all and all, a fun time!

For my second full-day in Dubai, I opted to take a day trip to nearby Abu Dhabi. It was hard to imagine a more opulent city… dripping with wealth at every turn.

The main highlight of the day was visiting the Sheikh Zayed Mosque which can accommodate over 40,000 worshippers. The main prayer hall is even said to have the world’s largest carpet. The mosque was one of the most stunning buildings that I have ever seen, and I felt so fortunate to be allowed to enter such a sacred place. 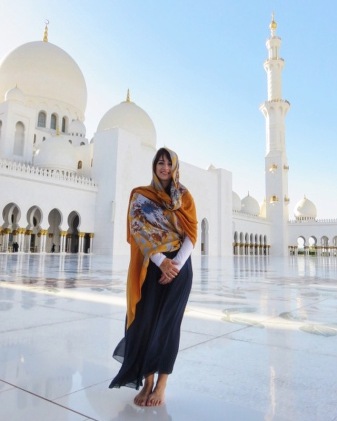 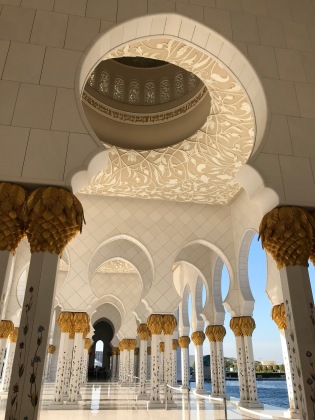 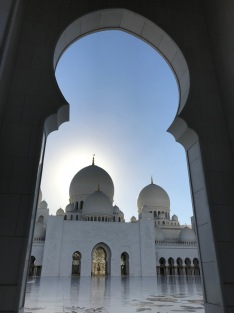 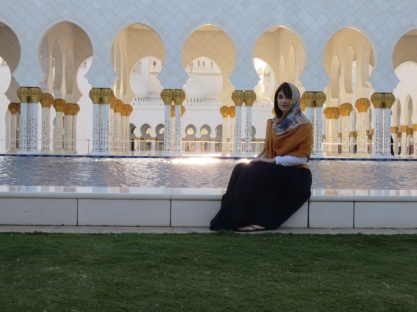 For my final full day in Dubai, it was finally time to see the big sights – The Burj al Arab Hotel, Burj Khalifa, which currently holds the record for World’s tallest building, and the Dubai Mall. 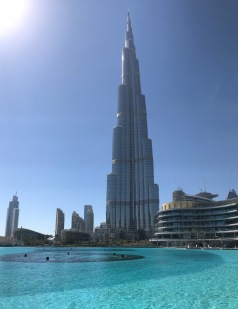 I wasn’t sure if I wanted to spend the money to go to the top of the Burj – it seemed very touristy and I’d already been to the top of so many tall buildings. But, it is currently the tallest building in the world, so carpe diem! It was pretty crazy being that high up and seeing all the other massive skyscrapers looking so tiny below. And the best part, was the Bellagio style fountain and light show that happens in front (and on) the tower every evening. Definitely worth waiting around for.

In conclusion, I’m glad that I went to Dubai. It was impressive AF and truly unlike any other place I’ve ever been. But that being said, I found Dubai to be overwhelming and not in a good way. The heat, the flashy wealth, the sterile streets. Wandering around the mall seeing stores overly staffed, knowing that many of the workers are far from home and family. A place that is seemingly every culture and no culture all at once. A place where intolerance still runs rampant. It was all a bit too much and I can think of so many more authentic places to visit with the precious time that I have. And so, I think it was one and done for me and the UAE.