Greetings from the Southern Hemisphere!

After two days in Ecuador we are starting to get a real sense of the adventures that are before us. We are staying at a wonderful hostel (Travellers Hotel) in the northern part of the city where most of the tourists stay. We have met many great people at our hostel from all walks of life. One older lady is staying by herself in Quito for 5 months!!! That makes our trip seem like a weekend getaway.

On our first full day in the city we decided to be really adventurous and take the trole bus. Up until this point we had been taking cabs but for 25 cents the Menno in me decided to give it a chance. We made it to the Plaza Grande in the old part of Quito just in time for the weekly procession of guards on horseback and parade of music. We weren’t sure at first if we had simply lucked into some special occasion… but apparently this happens every Monday. However, we were also able to wave at the President of Ecuador from our front row perches. We felt pretty fortunate and the hundreds of guards also made us feel extra safe. Unlike at home, we love seeing police in the city. 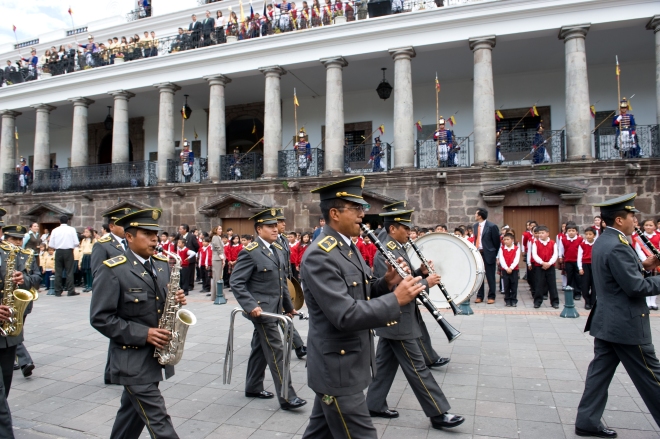 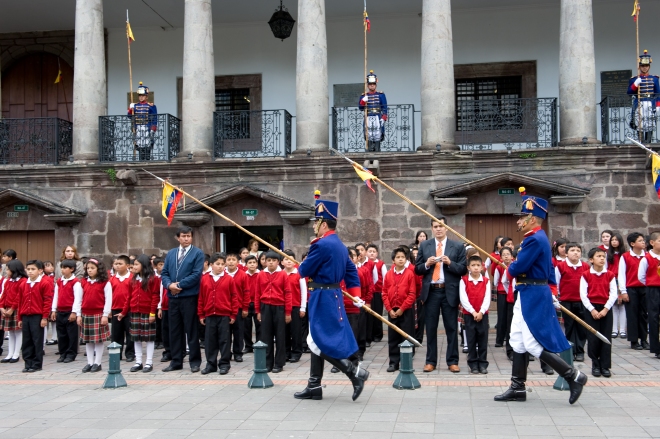 The day was simply beautiful: clear skies, 23 degrees, pretty much paradise. We ended up just wandering around the old town for a while until I spotted some high steeples in the distance. To get there we had to walk up some steep hills that would rival the streets of San Francisco, but we made it. We are definitely wishing we had spent the past semester mountain climbing. Machu Picchu should be very interesting. The basilica was magnificent. It was only “finished” in the 1980s so it is much newer than most of the churches in Quito and was modeled after Notre Dame. We paid the $2 fee to climb up a series of steep ladders until we were standing at the top of the steeple. The views were simply stunning. During our time at the top we chatted with various travellers and eventually made friends with Jenny from New Jersey. She is doing a study abroad in Quito and was travelling solo that day. She asked if she could tag along with us and together we walked back to the main square. We eventually started discussing our future travel plans and we told her that we planned to go to Mindo the following day. We were more than happy when she asked if she could once again tag along. 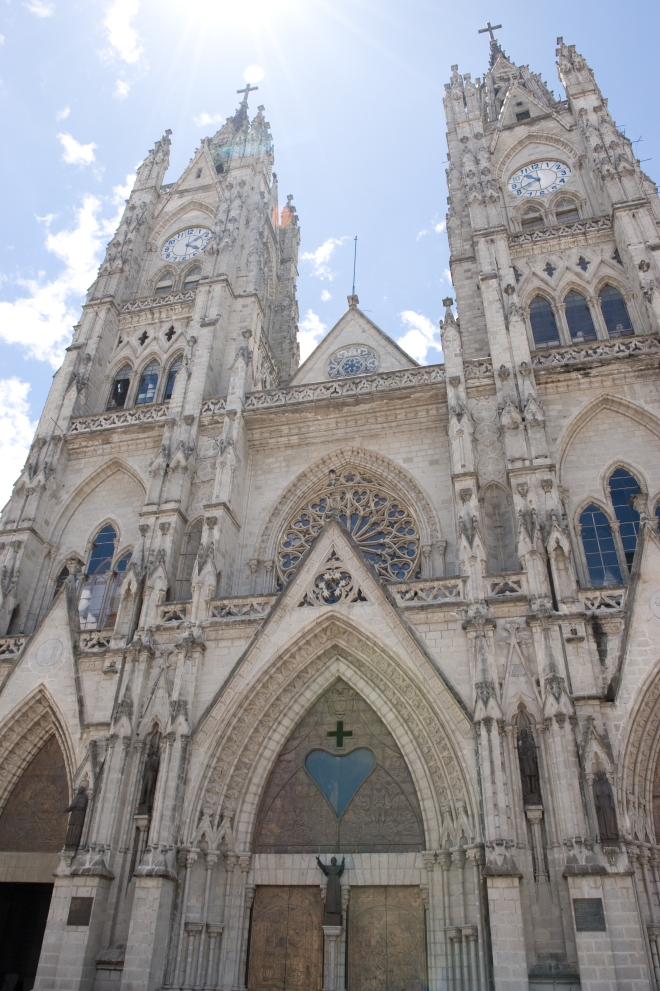 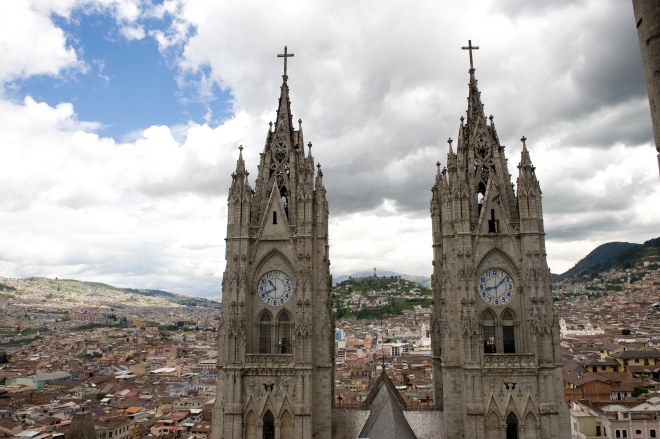 Sitting on the Top of the Basilica

After our full morning in the city we headed back to our hostel to relax. Instead I ended up having one of my typical panic attacks. The bus situation for our next trip was causing problems and I was stressing out as per usual. But, fortunately our hostel is the best ever. Diego (who speaks English fluently) was taking us on a night tour of the city and drove us to the bus depot first. There, he did all the talking and got us booked on our bus. We officially love the Travellers Hotel!!! From that point we were perfectly content. Our tour consisted of Diego driving us around in his SUV so that we could see and stop at all the major sights for pictures, and finally learn some of the history. We had a great time and since travelling at night is not advisable for tourists… we knew we had lucked into a great opportunity to see this beautiful UNESCO city.

Today was one of my favourite days so far. Our new friend Jenny met us outside our hostel at 9am and we walked to the nearby bus station. Together we took a 2ish hour bus to the town of Mindo, which is located in the Cloud Forest. We hopped off the bus on the side of the busy road and were immediately greeted by a staff member from Mindo Ropes & Canopy. We drove deep into the jungle where Jenny, Laura, and I met our four fellow tourists and suited up for the day. We then spent a good two hours ziplining on 10 different lines through the canopy. It was AMAZING! Our guides let us experiment with many different positions such as Superman (face first, no hands, basically just like Superman) and the Butterfly (upside down, no hands, with your feet in the air). Don’t worry… I have photos and videos to prove it. This was such an exciting experience for me since I not only worked on a challenge course in Texas but also because my favourite travel show (Departures) went to this exact same place. 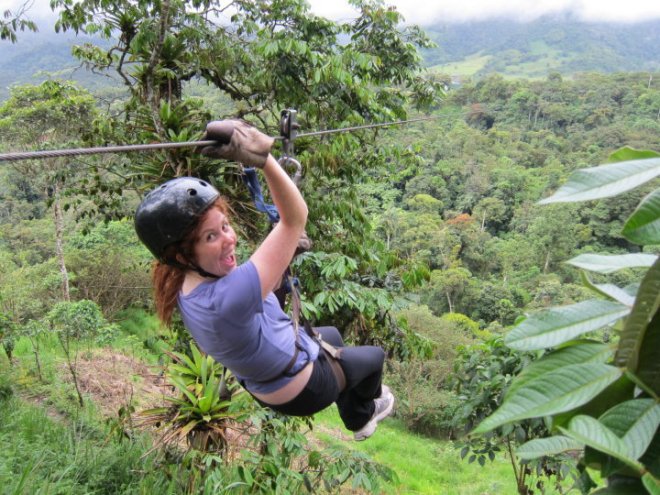 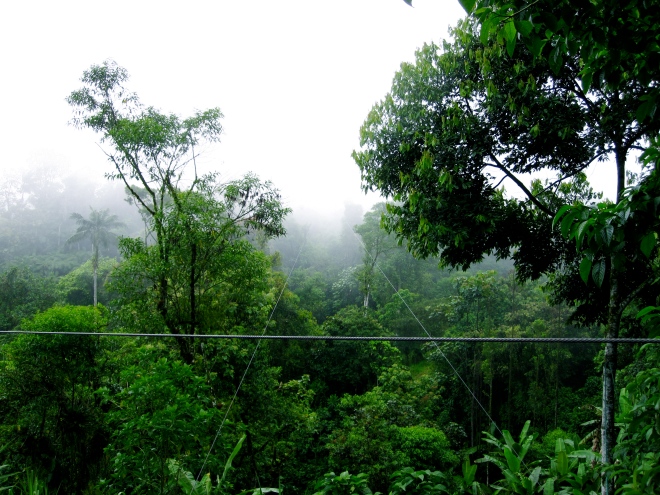 After our day of flying through the trees at speeds of 65km/hr, we boarded a bus back to Quito. After a second city bus and a short walk… the three amigas decided to break for an actual sit down dinner. We ate at the coolest restuarant called Azuca Latin Bistro. We sat on a rooftop patio with a sand floor and ate fantastic food. It would definitely be a trendy place to go in Vancouver. After dinner we walked back to our hostel and said farewell to our new friend.

Tomorrow we are leaving Quito behind and boarding at 12 hour bus to Cuenca that departs at 5:30am. We are hoping that the scenery is mind blowing so that we are semi-occupied for the day, but we do have fully charged Ipods and some snacks that should carry us through. Let’s hope Cuenca is worth the trip.