Since I was 8 years old, I have dreamed of visiting the Amazon Rainforest. That dream finally came true but it was not exactly what I expected.

Laura and I flew from Lima to Puerto Maldonado which is near the Brazilian border. As we walked off the plane we were expecting it to be hot and muggy, but apparently we had arrived during a cold wave from Patagonia. The air was crisp and the sky was drizzling slightly. We were more than happy to have our warm layers. We were met at the airport and taken to our new home, The Anaconda Lodge, in the back of a wagon. A great start to our jungle adventure. 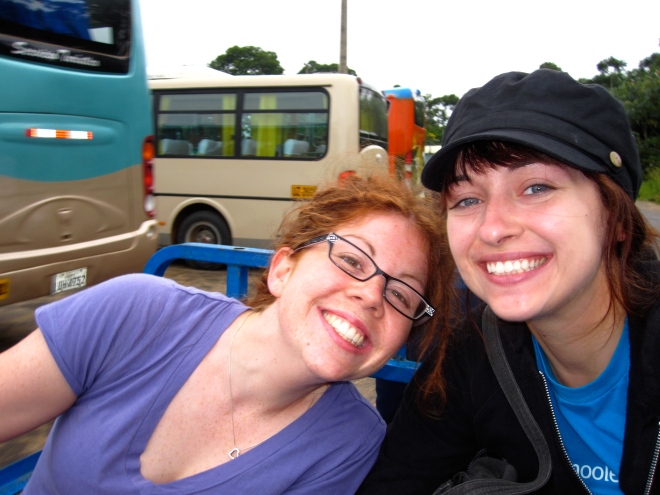 The Anaconda Lodge itself is a series of bungalows nestled in a botancial garden on the edge of the town of Puerto Maldonado. Our bungalow was adorable, complete with mosquito netting and hammocks. Almost instantly we were greeted by some of our neighbours… a couple extremely tame and very friendly spider monkeys. We were quite entralled with our little oasis in the jungle and spent the chilly afternoon bundled in our coats so that we could still enjoy the hammocks. That evening we headed down to the main building where the owner’s Thai wife runs a restaurant. We had some amazing Thai food and made friends with 2 other couples from Canada. 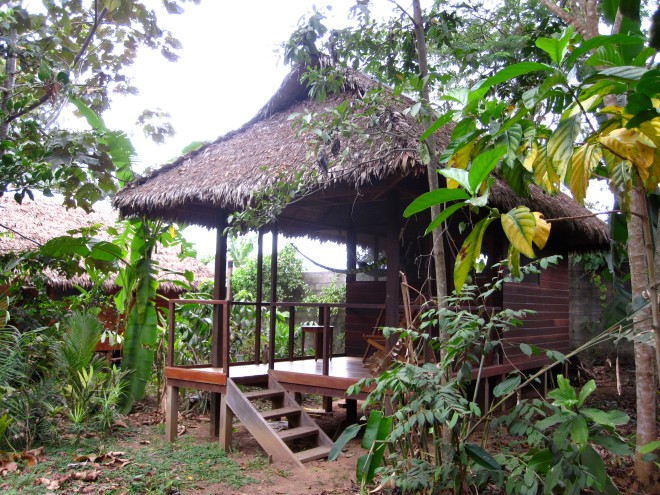 Our Bungalow at the Anaconda Lodge 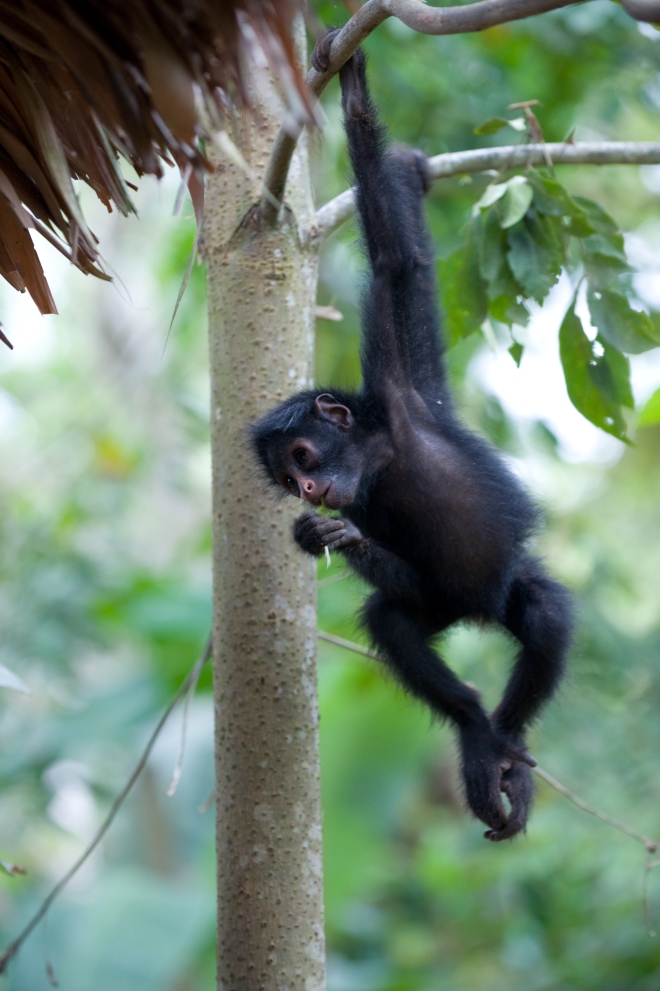 Our second day in the jungle was much less relaxing. We started our day at 6am when we finally emerged from our bungalow after the most restless night of our lives. The pack of howler monkeys and the wild roosters kept us up ALL night long. I was under the impression that roosters were supposed to wake you up at dawn but apparently they act more like a grandfather clock with regular chiming (1am, 2am, 3am). Not impressed. Fortunately our pancake breakfast was so excellent that it put us back in good spirits. Then at 7am we were off for a full day trip to Lake Sandoval. Our guide, Jose, picked us up and drove us by motokar (like a tuk tuk) into town. The town itself is quite forgetable. The market is like a giant dollar store with the strangest mish mash of items you’ve ever seen. Need a flashlight… got that. What about some 80s scrunchies… you’ll find that too. The town is definitely not set up for tourism which is kind of refreshing in a way. We never got hassled, which was a very nice change of pace for us. 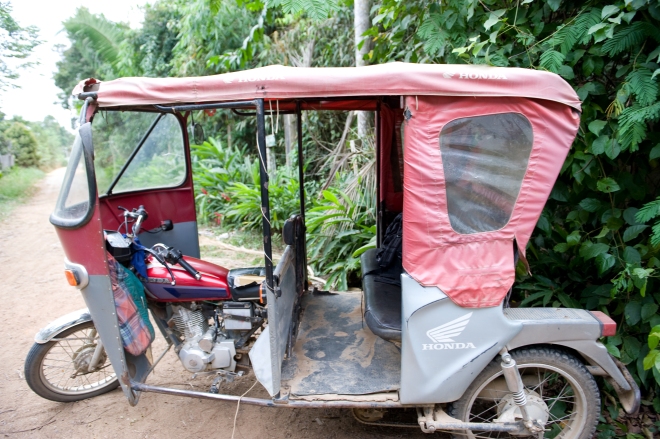 Anyways, back to the day trip. We then boarded a motor boat and cruised down the Madre de Dios River for close to an hour. We almost froze because once again the weather was crazy cold during our stay. But once we got to Lake Sandoval it was actually the perfect temperature. We didn’t have to worry about getting burnt and we happily wore long sleeves to keep the mosquitoes away. As much as I love hot weather, the temperature was actually perfect for what we were doing. 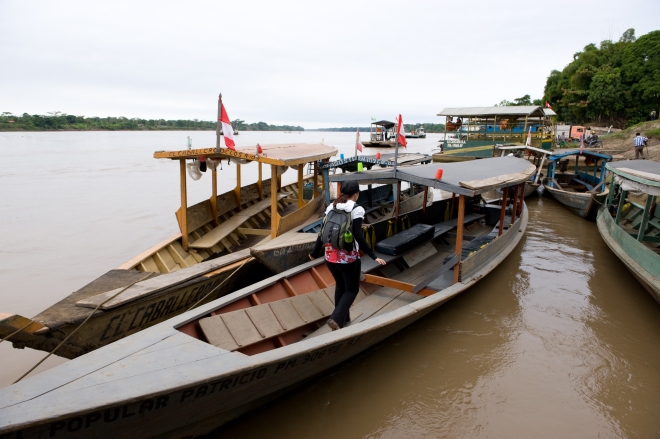 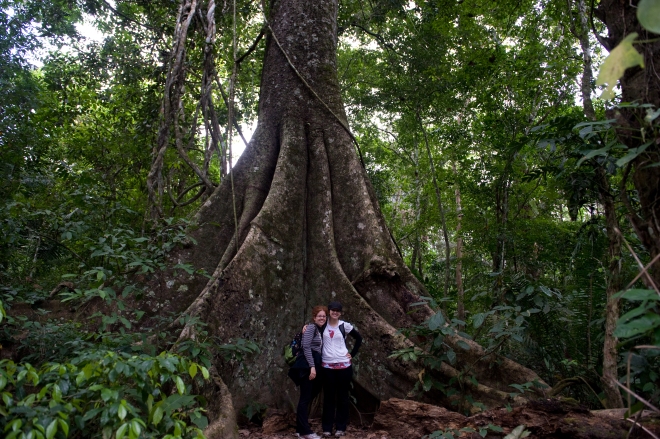 We then hiked through the jungle for about 5km looking for animals and then finally emerged at the lake. Our guide paddled us around the lake for a solid 5 hours… with a short lunch break. That’s right… 5 hours. You may be wondering what we did… good question. We saw lots of birds (my favourites were the Macaws), squirrel monkeys and Capuchins, black otters, and caiman (like small crocodiles). The lake itself was stunning and Laura took tons of photos but it was a very long day. We had to make the same trek back, followed by the motor boat ride and didn’t get back to our lodge until 7pm. The sun goes down here very early, so we trekked home in the dark which made it seem even later than it was. 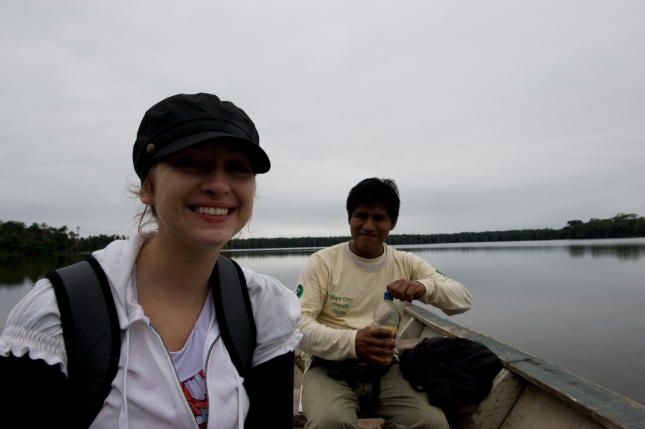 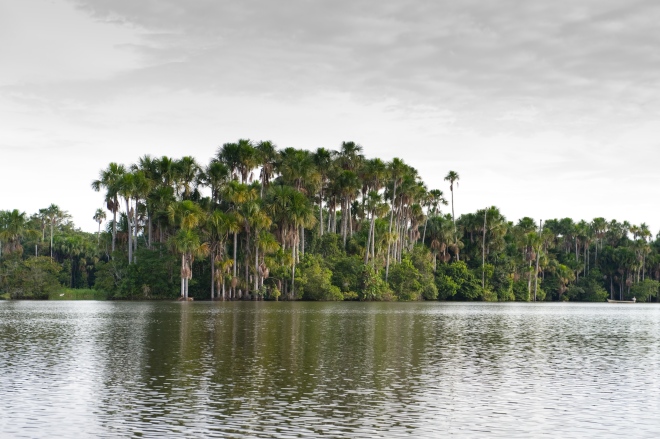 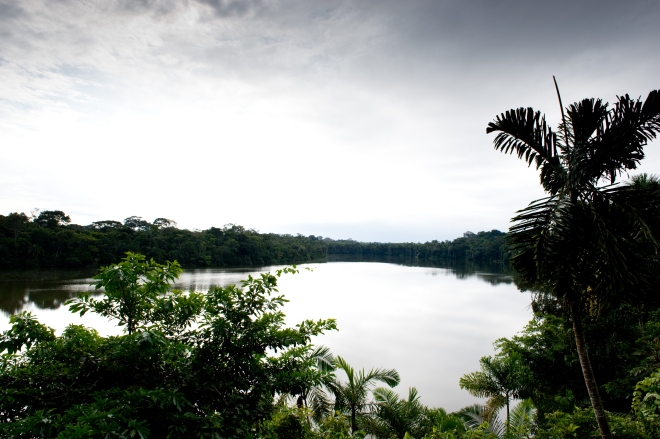 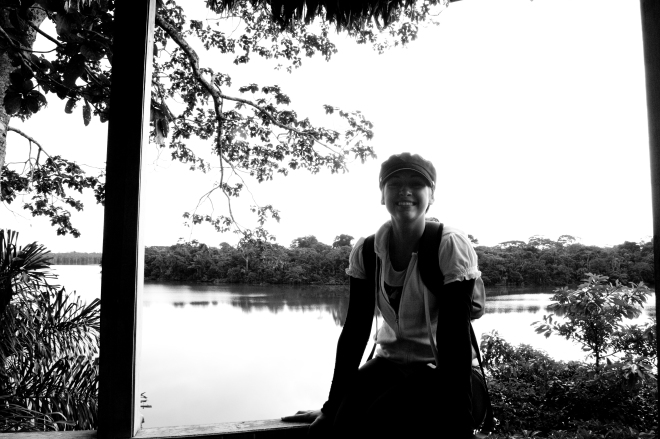 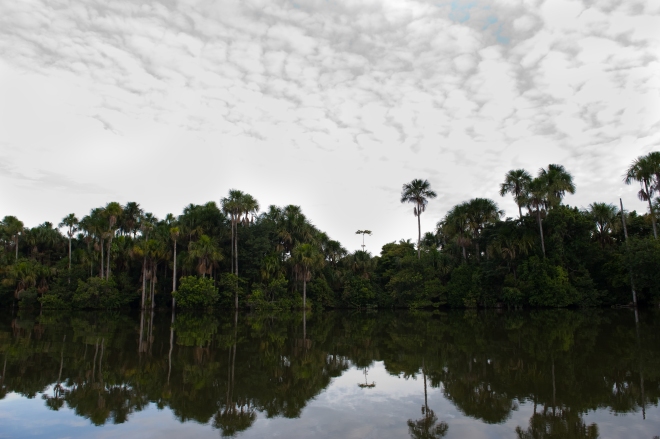 It was a good way to see the jungle, but we were definitely done after a couple nights. Our favourite part of our trek was our guide Jose. He had a limited knowledge of English but as soon as he discovered we were Canadian he went on and on about Avril Lavigne. I think he thought that we must know her and could hook him up or something. 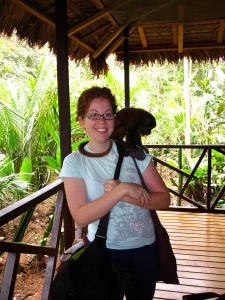 Laura and her monkey friend just before it bit her

Back at the Lodge we encountered a group of 24 American students from a private Christian university in Nashville, TN. Our favourite little Thai chef was cooking up a Thai buffet for 24 soles (approx. $8) so we decided to join in. We sat with our new friends Ryan and Stephanie from Toronto and devoured plate after plate of the best Thai food I’ve ever had. Then a couple of  ‘rebellious’ students decided to join us upstairs in the loft so that could drink some wine. Apparently they would get kicked out of their school for drinking so this was quite scandalous. The conversations that proceeded were dominated by religion and politics and was highly entertaining. On one side you have Stephanie, the Liberal minded atheist from Canada. In the other corner is Mark, the conservative Christian with a history/political science major from the South. Throw in some cervesas and we were up until 11pm watching the debate go around and around.

Throughout our travels, Laura and I have met so many people from so many walks of life and I think that has been one of my major highlights so far. I just love meeting people and learning about their views… never a dull moment.

For our last night at the Lodge, I learned my lesson and used ear plugs. It was a vast improvement but still less than ideal. I can rough it if I have to… but cold showers and no sleep is not my favourite way to travel.

Next stop… Cuzco and the land of the Incas.