Today I was once again made thankful that I get to live in a city. A comfortable, safe, and beautiful city.

Our major excursion today was to visit the Honey Island Swamp just outside of New Orleans. On the way we were able to see some of Hurricane Katrina’s destruction as many buildings are still completely abandoned or damaged. Our driver has lived in the city his whole life and told us stories of what life was like after the storm. I can’t imagine the suffering and loss that these people endured and it makes me appreciate their strength and spirit all the more. The people of New Orleans have blown us away with their kindness and hospitality and injected so much humour into our days. It’s amazing that they still have so much joy after such hardship.

Just across Lake Pontchartrain is Honey Island swamp, which is unique because it’s one of the least-altered river swamps in the country. Nearly 70,000 acres of it is a permanently-protected wildlife area. On our tour we saw snakes, birds, racoons, and wild hogs but alas no alligators were out in the cold winter weather. An unexpected trip highlight was visiting the Cajun Fishing Village where the Academy Award nominated film Beasts of the Southern Wild was filmed. The people live in these rundown shacks that float on the swamp. Apparently most of them are drunks that just fish and drink moonshine all day. It is incredible to think that people actually choose to live like this. It was like taking a tour of celebrity homes… except the opposite. Half of them were falling into the water or had been abandoned after flood damage. Hmm… maybe you shouldn’t build your house on a swamp?

All in all, it was a very enjoyable, albeit chilly boat tour through the cyprus forest. The spanish moss hanging over head was eerie and magical at the same time and beautiful in its own unique way. And we ended up seeing a baby alligator in the aquarium at the end of the tour so we left satisfied customers. 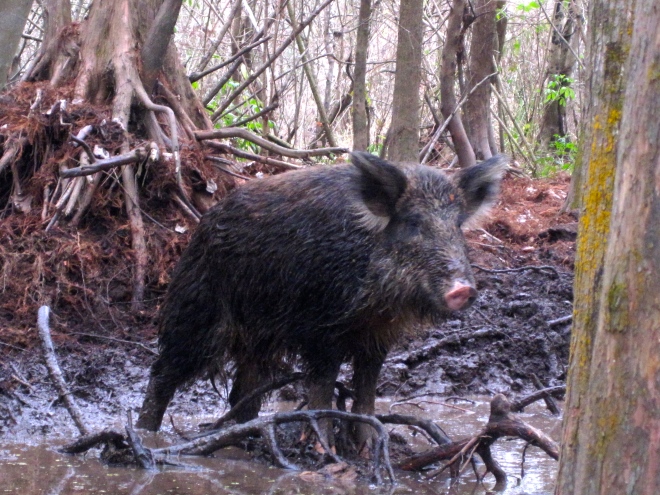 One thought on “Honey Island Swamp”