I have a confession. Sometimes I get tired of sightseeing.

It hasn’t happened to me very often, but travel fatigue can hit even the most passionate and voracious globetrotter.

Back in January 2006 I was halfway through an 8-month European backpacking expedition when I ended up in Barcelona. Cold. Tired. And honestly ready to give my camera a break. I had already been through four countries and had five more ahead of me. After months of traipsing around in freezing cold climates I was more than ready to feel the warm Spanish sun on my skin and to kick back and relax. I sat on the beach. I went to Starbucks. I taught myself about siestas. I was taking a little vacation from my vacation.

It wasn’t until I had moved south and started covering the rest of Spain that I realized all of the amazing things that I had completely missed while in Barcelona. How is it possible that I hadn’t seen even one piece of Gaudi architecture? In my frustration, I promised myself that someday I would return and make up for my little episode of burnout.

Nine years later (almost to the day) I finally made it back. This time was different. 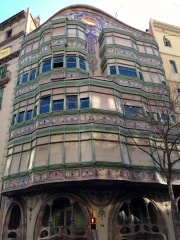 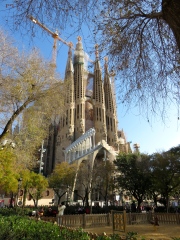 His architecture is unmistakeable and seemingly unavoidable (although I previously proved that theory wrong). This time it felt like we couldn’t walk anywhere without passing by one of his distinctive achievements.

But of all Gaudi’s works, our favourite spot was absolutely Park Guell.

This public park system on Carmel Hill is composed of gorgeous gardens and architectural elements that entertained us for hours. The park was designed by Gaudi and built between 1900-1914 and declared a UNESCO World Heritage Site in 1984.

It can get quite crowded and in order to preserve the monuments, portions of the park are only open to paying guests. Access to the most famous areas are limited to 400 people every 30 minutes. We ended up having to wait for a while but the rest of the park had plenty to keep us occupied with stunning city views and street performers playing Spanish guitar.

And the monument precinct was definitely worth the price and the wait.

The most popular area is without a doubt the Greek Theatre. This open square is surrounded by a gorgeous tile-shard mosaic bench. While we were frantically trying to get the perfect photo… it seemed like everyone else was using the seating to take a nap in the sun. Clearly they didn’t appreciate the art in the same way we did. 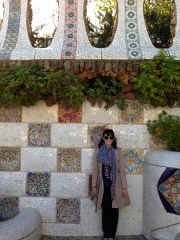 So after nine years of suspense I finally got to see what all the fuss was about and it lived up to my expectations. Beautiful. Unique. Awe-inspiring.

Next up: More Barcelona and the Magnificent Montserrat.