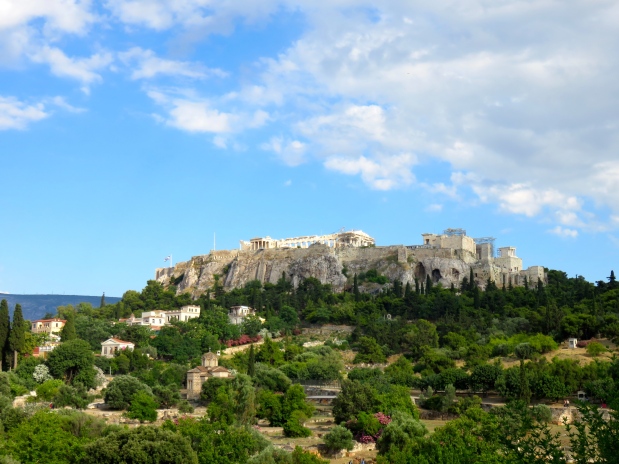 I had incredibly low expectations for my two nights in Athens.

I first visited this Grecian capital back in March 2003 as part of a 10-day Art & History tour with my high school. I did not love it. Far from it. In fact, I have spent the last decade telling people that it is my least favourite city in Europe. Ouch!

So when I decided to return to Greece my heart was set on the islands. But, since Athens still made the most logical starting point, I relented to the wishes of my travel companions and spent a full day touring many of the same famous sites that failed to wow me the first time. And… what do you know. Athens was NOTHING like I remembered it.

This is not the first time that a city has improved upon its initial impressions. Barcelona, Rome, and Portland are just a few names that won me over on the SECOND visit and now are some of my favourite cities ever! This is why I absolutely NEVER SAY NEVER. I am so glad I was willing to go back to all of these places because the memories I made the second time around are worth every bit of letdown on the first run through.

But enough preamble… here’s what we got into!

The most important site in Athens is without-a-doubt The Acropolis – an ancient citadel perched high on a rocky outcrop above the city. It contains the remains of several ancient buildings, most famously the Parthenon, a temple dedicated to the goddess Athena (patron and namesake of Athens).

Knowing this was a must-see and with only a short stay in the city, we opted to stay in a very well-located apartment just minutes away. This made our early start time much more manageable. We were waiting at the ticket entrance before it opened at 8:00am to beat the crowds and I’m so glad that we did. It wasn’t difficult to get photos and we had plenty of time to soak of the panoramic city views. We even had time to climb neighbouring Mars Hill sans spectators. 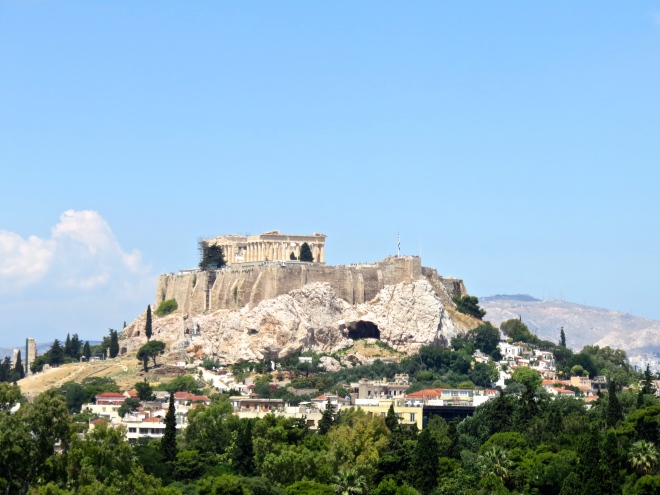 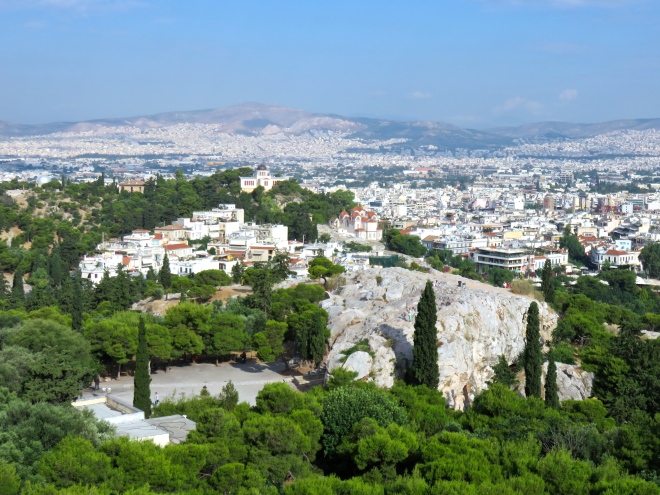 Parliament Buildings – Changing of the Guard

Every Sunday at 11:00am there is an elaborate changing of the guard ceremony at the Tomb of the Unknown Soldier outside the Presidential Mansion in Syntagma Square. And what do you know… our one day in Athens just so happened to be on a Sunday. I didn’t even plan that! So we made sure to get there early to nab a spot on the street and gleefully watched the impressive procession of synchronized guardsmen in all their skirted, pom pom tossing glory. I think I enjoyed it even more than the UK variety at Buckingham Palace.

The Temple of Olympian Zeus

Not too far down the road we came across yet another ancient ruin. This time the Temple of Zeus! The entrance fee was included in our Acropolis ticket and we only stayed long enough to marvel at the sheer size of it. How did people build these monstrosities 2500 years ago? 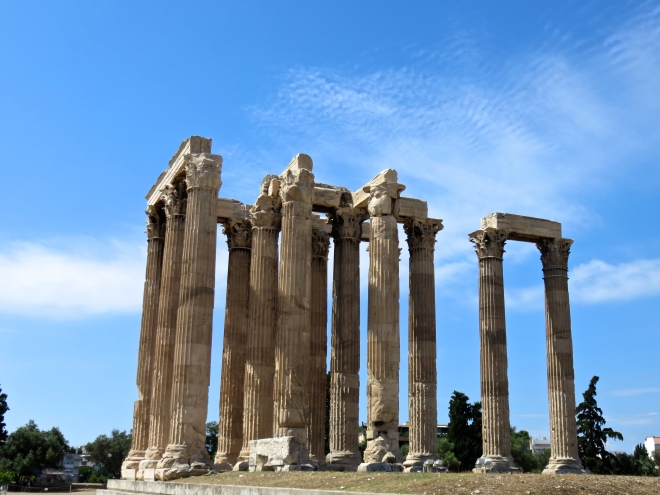 Okay – this one I did remember and was definitely excited to revisit. It probably has to do with my Olympic obsession but seriously, how could you not be impressed by a 50,000 seat stadium built entirely out of MARBLE! The site of the very first modern Olympic games in 1896 even dates back to ancient times. Mindy and I couldn’t help getting cheesy with a sporty photo shoot.

This new museum opened to the public back in 2009 to house the artifacts found on the Acropolis. It was even built overtop of an archaeological site with glass walkways allowing you to view the ruins below – how cool! I loved the juxtaposition of this modern building amidst the surrounding ancient architecture. I’m only a casual fan of museums but it was a nice air-conditioned break from the summer heat and an interesting walk through. Plus it has miniatures! I’m such a sucker for those. 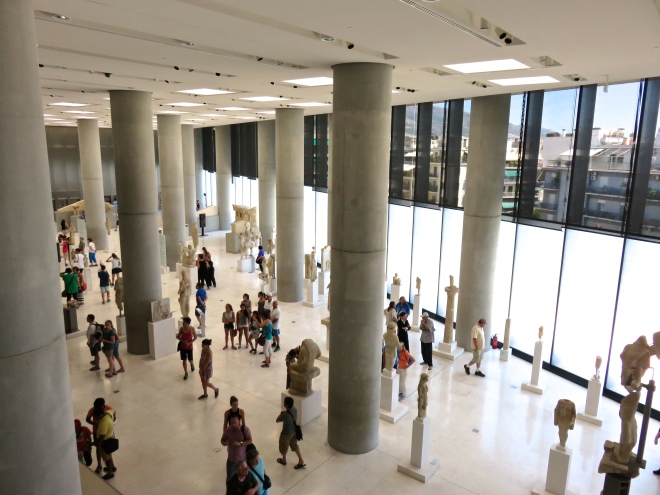 The Agora was the heart of ancient Athens, the focus of political, commercial, administrative and social activity, the religious and cultural centre, and the seat of justice. This one also happens to be the best-known example of an ancient Greek agora. Honestly, by the time we got here I was a bit tuckered out from our full day of sightseeing. Even though it was approaching golden hour (my favourite time of day for photos!) I couldn’t muster up a lot of energy. But the grounds are extensive and beautifully nestled in below the Acropolis. It’s definitely worth a visit! 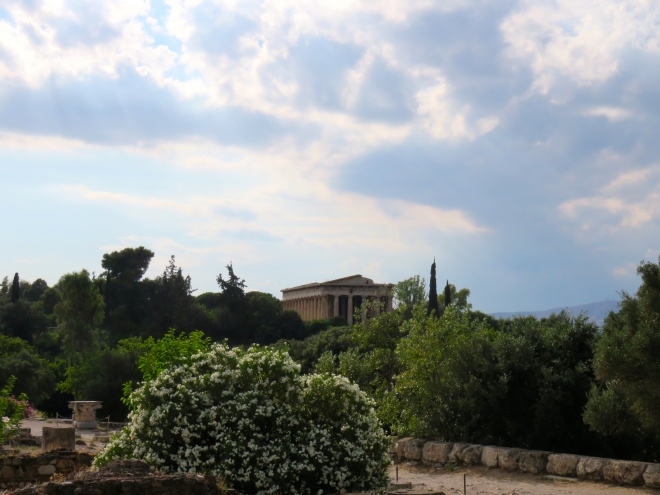 So by the end of my two nights in Athens, I was actually wishing I had a couple more. I could have happily dined and strolled in the Plaka neighbourhood for another evening, soaking up the European café culture that I have become so insanely fond of. But, alas, the Greek Islands were calling and I didn’t want to miss one second of my time in the Cyclades… not even Zeus could stop me.

Next up: Santorini at last!!!

It’s the most wonderful time of the year!!!! Summer is swiftly approaching and with it… my next big travel adventure!

In many ways, this trip has been 5 years in the making. It all started in a crowded pub after the first day of an economic conference. My university friends, married couple Rachel & Caleb, were hilariously sharing the story of their disastrous honeymoon in Paris. It was a 3-week comedy of errors and the retelling had our table in stiches. But this story was more of a tragedy in truth because poor Rachel virtually swore off international travel ever since. Being the travel evangelist that I am, I promised that someday I would take her back to Europe and show her how awesome it can be. Well, that someday has finally arrived.

In just a few weeks I am travelling to Greece and Turkey with both Rachel & Caleb (wish me luck!) as well as my frequent travel partner Mindy. If summer in the Mediterranean can’t win them over, then nothing will. We only have 2 weeks but I am confident that our itinerary has something for everyone: Beaches, History, Culture, Adventure, and Food!

These are the activities I am most looking forward to:

I am SOOO excited for this trip and I can’t wait to start posting about it. Stay tuned this summer for all the details!

Where are your summer plans taking you? Have you been to Greece or Turkey? Any tips? Leave a comment below.