Boston is America’s college town. There are more than 100 colleges and universities in the greater Boston, Massachusetts area, earning the title of most students per capita with ease. In fact, one in every five people is either a student or affiliated with higher education. From my brief visit I quickly saw that this incredibly walkable “big city” has a small town feel that is the perfect setting for a large student population. Too bad I’ve already got my degree…

I was able to visit several different campus’ during my stay, including Northeastern, MIT, and a little old place you may have heard of called Harvard. I’m not going to lie, Harvard was the number one place on my to do list. Not only is it consistently ranked as the Top University in the WORLD, it’s also America’s oldest college founded nearly 400 years ago in 1636. Back in the day it used to be referred to as simply “the college” because it was the only one.

How do I know this you may ask? Well, I could have googled it but I decided to get my info the old fashioned way by taking a free campus tour provided by a an actual Harvard student. It was fantastic! My sophomore Kiwi guide gave us the traditional historical information but also gave us an insider’s perspective on student life and some of the fascinating traditions that have been passed on through the generations. Walking the grounds of this colonial campus was like stepping back in time… no wonder they call it New England.

I won’t tell you everything I learned on my hour long tour because I’m too lazy (and I didn’t take notes) but I will share a few key pieces that stood out to me.

Harvard gets its name from deceased clergyman John Harvard, who left the school £779 and approximately 400 books. I’m sure that was a huge donation back in 1638 but today that doesn’t even buy a semester’s worth of textbooks let alone get an entire college named after you.

There is even an incredibly famous (and inaccurate) statue situated in Harvard Yard to commemorate his contribution. The Statue of Three Lies is the third most photographed statue in the United States, behind only the Statue of Liberty and the Lincoln Memorial. Not bad company eh? Apparently students (and visitors) rub his toe for good luck but another rumor has it that freshmen also pee on that very same toe… so I’ll let you decide the value of a little luck.

But the statue is not all that it seems. It’s actually nicknamed the “statue of three lies” because of all the inaccuracies inscribed on it:

(Lie #1) John Harvard did not actually found Harvard. Even though the statue says “founder” John was simply a benefactor.

Harry Elkins Widener’s mother constructed the Memorial Library in her son’s name after his tragic death in the sinking of the Titanic in 1912. Widener was a Harvard alumnus and a great lover of books which made the library a fitting tribute and is now the world’s largest university library system. With over 3.5 million books the library’s shelves run four miles underground over ten levels. The place is completely dark until you begin walking and then the lights flicker on in front and go off behind you as you walk. I don’t know about you, but that sounds terrifying. I’d need to bring a survival kit and a whistle to go down there alone.

Another fun fact: Widener Library has a copy of the Gutenberg Bible! Only twenty one complete copies survive, and they are considered to be among the most valuable books in the world. Apparently a staff member of the library flips one page of the bible each day. At 1,286 pages long that would take just about as long as a Harvard degree to read each page. Of course you’d also have to read Latin, but I suspect if you’re smart enough to get into Harvard, you’d also be smart enough to learn Latin…

It also turns out that the freshman dining hall (Annenburg Hall – not open to the public) is also the prototype that JK Rowling used for Hogwarts. Can you imagine eating breakfast in Hogwarts every day?

And walking the grounds during these autumn months was simply gorgeous. 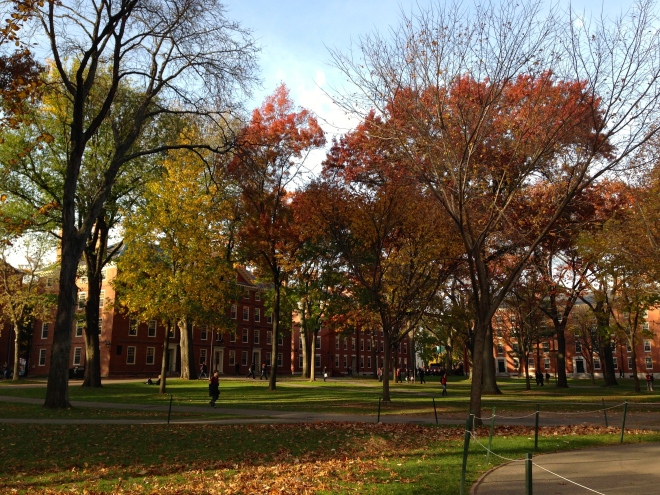 I highly recommend an afternoon at Harvard on your next visit to Boston/Cambridge. You actually get smarter by just being close to so much brilliance. Okay, maybe that’s not true but I did learn a lot on my campus tour that I didn’t already know and it almost made me want to become a student again. Almost. I think I’m pretty content with being a student of life for the time being.

A pretty great place to be stuck ☀️
“There's always a sunrise and always a sunset and it's up to you to choose to be there for it. Put yourself in the way of beauty.” - Cheryl Strayed
A lovely socially distant date day at VanDusen gardens!