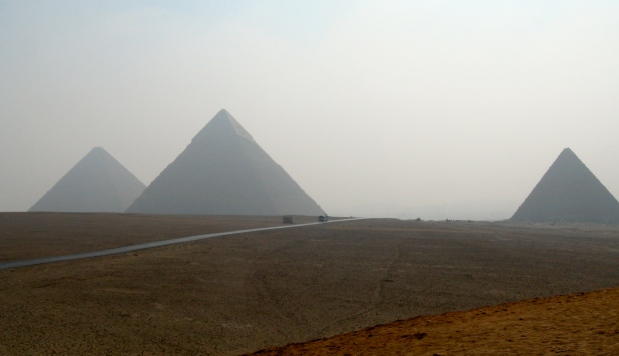 Back in summer 2008 (before the Revolution), I spent two glorious weeks in Egypt. I already talked about my luxurious stay in Sharm El Sheikh on the Red Sea, but now it’s time to talk about the Egypt that everyone knows… and the part of my trip that crossed off some big to-dos on my bucket list!

Upon landing in Cairo with my partner in crime, Stefi, we were met by our Insight Vacations guide and escorted to the beautiful 5 star Marriott Cairo Hotel with views of the Nile River. This place was so fancy they call it the palace and certainly had enough restaurants and grounds to make us reconsider ever leaving.

We had the day off (the real tour started the next day) so we decided that we would try and find Top Shop (this is before we had it in Canada) but ended up getting dropped off at the wrong mall where no one spoke English and tourists were clearly uncommon. I may have feared for my safety just a tad. But not to be deterred, we soldiered on in our quest to find expensive clothing and decided to try yet another mall. But, apparently our budgets were not meant to be blown and we ended up stumbling across an English movie theatre instead… with the newly released Dark Knight begging to be seen! Watching movies in foreign countries has become somewhat of a tradition for me over the years and usually makes for a very memorable experience. I love comparing the way people watch movies in other cultures. In Egypt there were no previews, assigned seating, an intermission, and people talking on their phones nonstop! To finish off our eventful evening, we almost died in a taxi on the way home. I feel like every traveller has a crazy taxi story but my goodness Cairo was the CRAZIEST! We honestly had to laugh to keep from crying. There were literally four “lanes” of traffic where there should have been two, tops! I just closed my eyes in the end.

On our first day of the “Best of Egypt Tour“ we hit up many of the major sights in Cairo including the Egyptian Museum (with King Tut’s treasures) and the Alabaster Mosque of Mohamed Ali. This was my first time ever setting foot in a mosque and we had to take our shoes off and adhere to a dress code… pretty standard stuff in Muslim countries. The best part was that even though our skirts were the same length, Stef had to wear a green modesty robe and I did not… teehee! 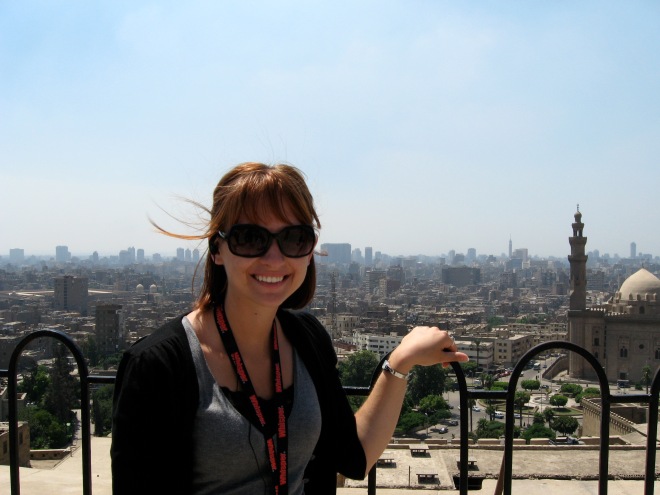 I got my first glance of the pyramids from the terrace but we were going to have to wait a whole week before getting a closer look. After some obligatory stops at a cotton store and a perfume shop, we boarded our overnight train to Aswan. Stef and I had a room all to ourselves! We may or may not have had a  dance party.

Night trains are not my favourite but waking up in a new city always makes it worth the discomfort. Our first stop of the day was the Aswan dam, which regulates the Nile River and has created the largest manmade lake in the world, Lake Nasser. The lake is so massive that it has actually altered the climate! Egypt used to get one day of rain once every 3 years and now it happens every year. In fact, it’s such an important structure that you are not allowed to video or take photos on the dam – but I totally cheated. 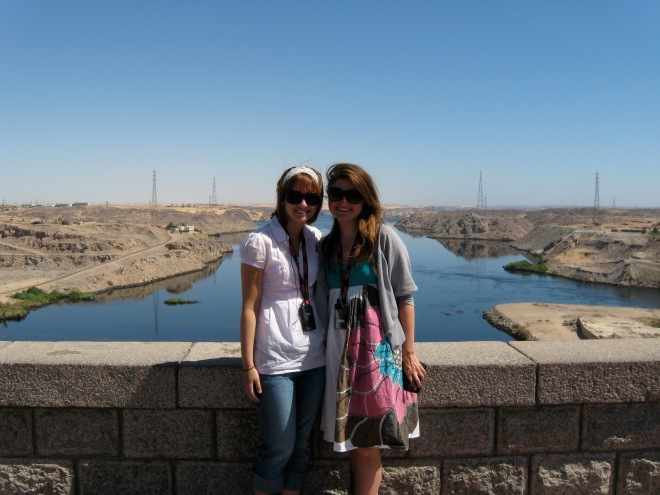 Next up, we took a ferry across the lake to an island where the temple of Philae was relocated due to flooding from the dam. 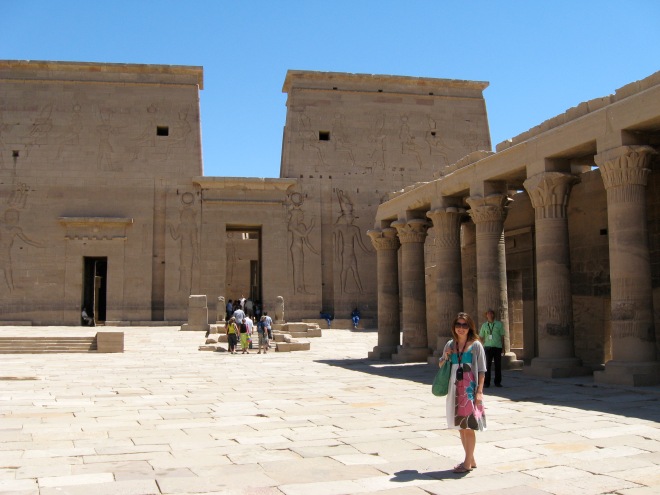 And our last stop of the morning was a quick (and hot!!) visit to the granite quarries where many of Egypt’s obelisks were made, including the unfinished obelisk that still lies attached to the bedrock. 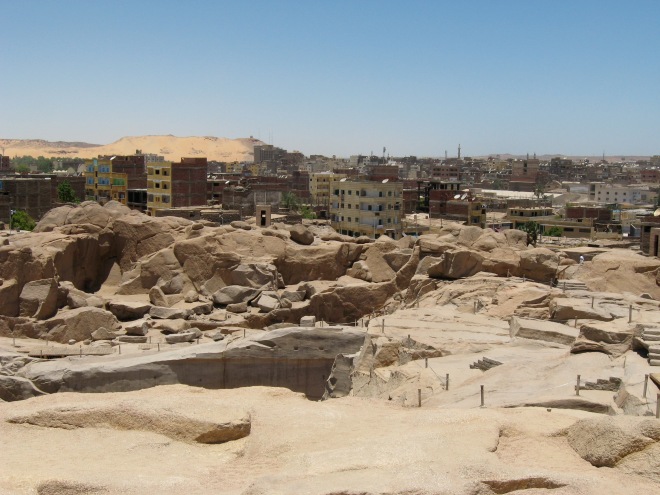 The luxury continued when we checked into our second 5 star hotel of the trip – The Movenpick Resort on Elephantine Island. We loved the water taxi ride to our island oasis and the welcome Hibiscus drink. 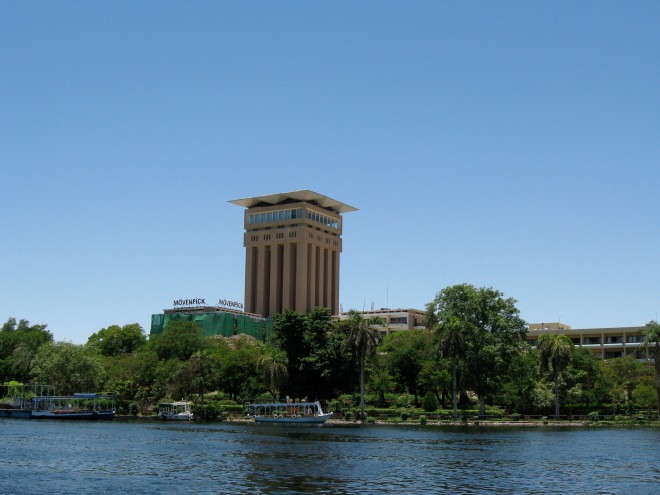 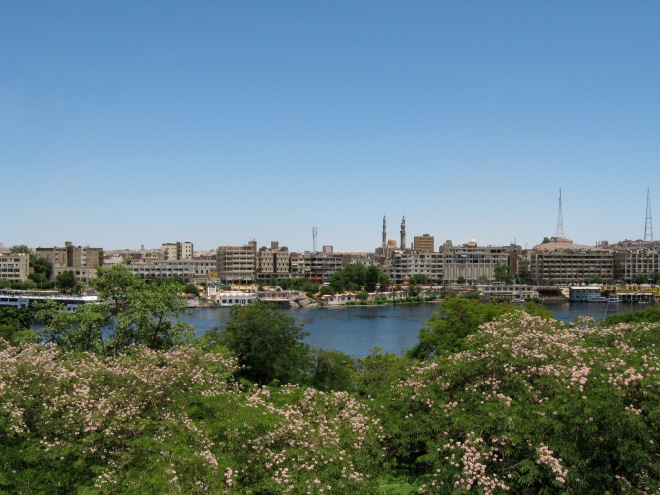 Not a bad view…

The highlight of the day (and what really sold me on Aswan) was our Golden hour felucca ride on the Nile. Oh yeah… and then to top it all off we enjoyed a premium high tea on the top floor (see what I did there?) of our hotel at sunset. 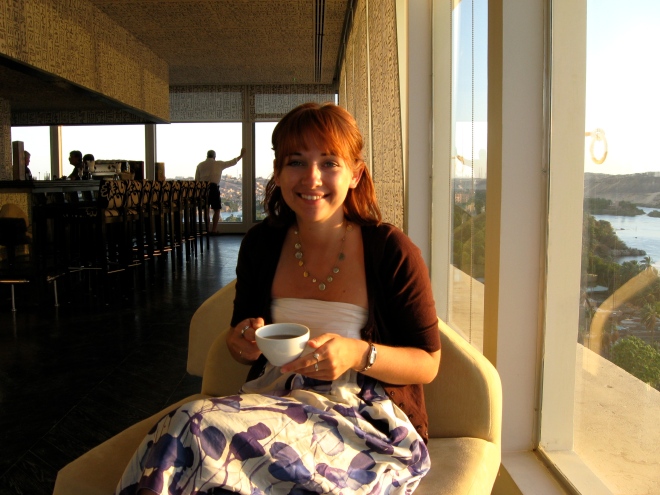 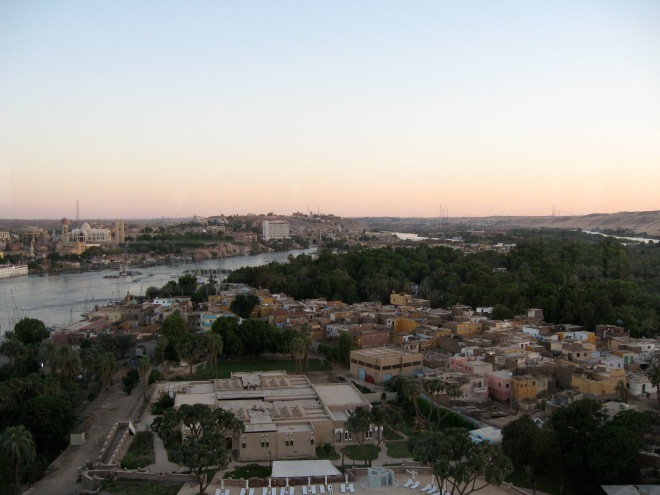 Overlooking Aswan and the Nile River

Abu Simbel The next day we woke up at the ungodly hour of 4:45am to head to the airport for our morning excursion to the two massive rock temples at Abu Simbel. The first temple we saw was dedicated to Ramses II and the second to Queen Nefertari… the only Egyptian temple dedicated to a woman. The Nubian complex had to be relocated in its entirety in 1968 to avoid their being submerged during the creation of Lake Nasser. I can’t even fathom how much effort that would take. 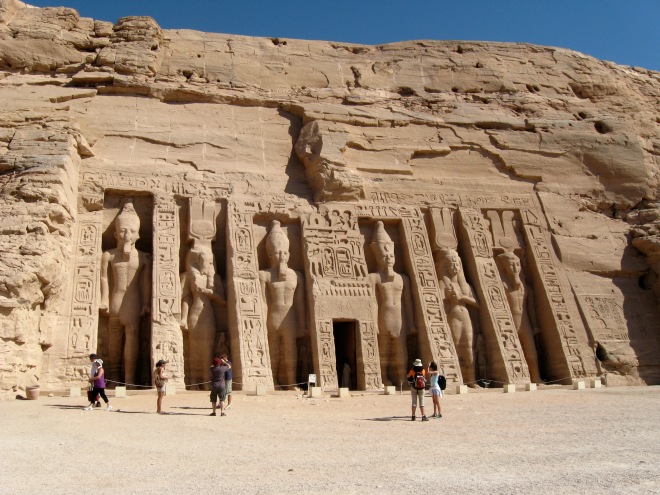 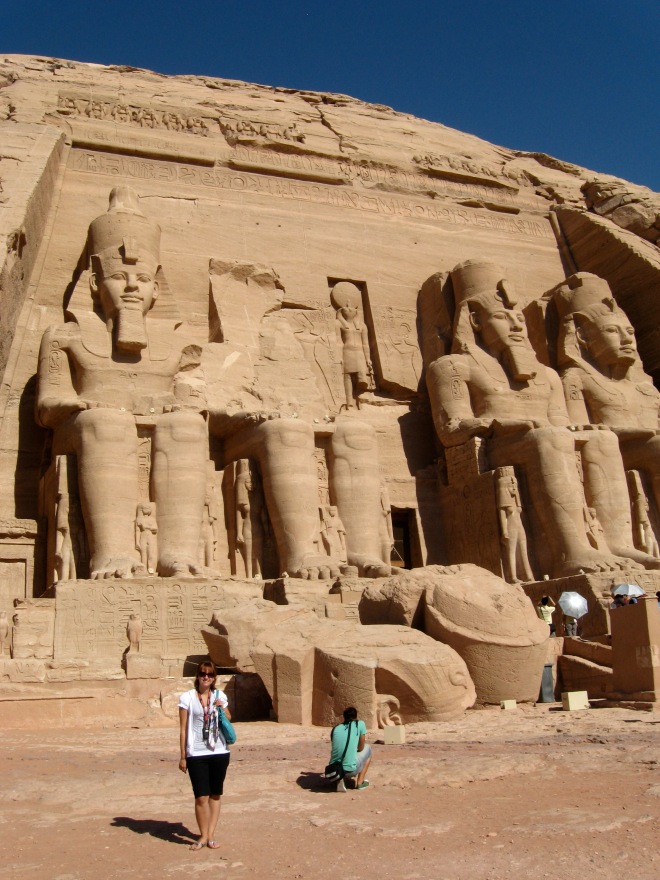 Back in Aswan we boarded the M.S. Media, our cruise ship for the next 3 days. This was my first river cruise and let me tell you, the rooms are SO much bigger than ocean liners. We even had a bathtub! Things were going swimmingly until… Stef got sick. It was bound to happen with our weak western stomachs but you really hope that it doesn’t. The odds were not in our favour. I ended up visiting the temple of Kom Ombo that evening by myself.

That evening… while Stef was still hiding out in our room, I attended the traditional Galabea party. Delicious Food. Belly Dancing. Whirling Dervishes. A totally normal Tuesday night. 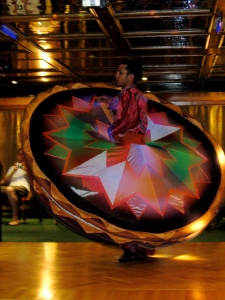 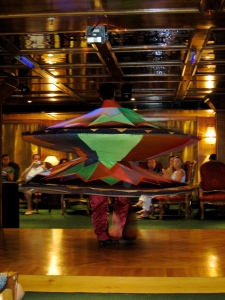 The next morning… I again got up realllllllly early again to check out the Edfu Temple (dedicated to the god Horus) before the scorching heat made it unbearable.

Stef finally returned to the land of the living and we spent most of the day lounging by the pool on the top deck and enjoying the views as we sailed to Luxor (aka ancient Thebes).

That evening we visited the Luxor Temple (so many temples!!). My favourite part was the avenue of sphinxes that used to extend a full 2 kilometres north to the Karnak Temple. Most of it is now covered by city but some have been excavated to show us what it would have been like.

We spent the day in the old capital and port city, Luxor. First we drove to the West Bank and into the desert to the Valley of the Kings. There were 62 tombs discovered there and the longest belonged to Hatshepshut, the first woman to become a king! We visited three tombs: Ramses I, Ramses III, and Ramses IV. 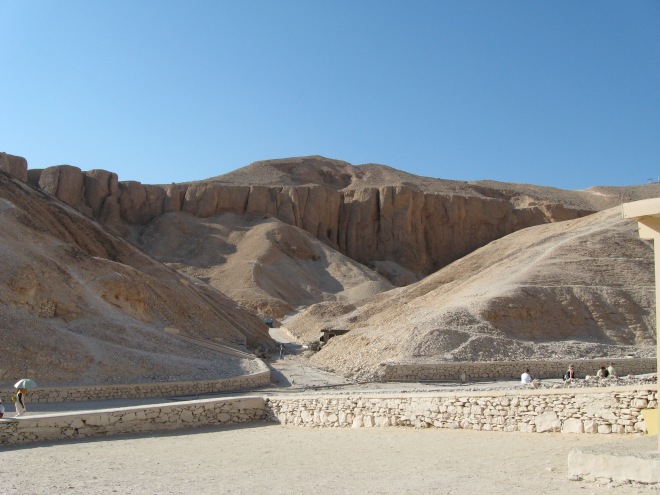 Shocker… it was a scorcher! Who would have guessed that Egypt in the summer is really hot?

Next up: Queen Hatshepsut’s Funeral Temple! This lady sure knew how to celebrate herself! This site was actually the victim of a terrorist attack in the late 90s. Tourism is (or was) the main source of income for Egypt so there is strong police/military presence at all tourist sites to protect against such attacks. We felt pretty safe even though I’m not the biggest fan of machine guns everywhere.

Wowza… this is a long post. If you’re still with me… there were some more ancient things (Colossi of Memnon) and we saw some hot air balloons… but what you really want to hear about is THE WORST THING YOU COULD EVER BE ASKED by a stranger. Due to the heat, we ventured out on our own (stupid perhaps) to find ice cream. The harassment and crude comments came within seconds of leaving the ship as we were followed by a young Nubian man. We tried to ignore him but he really wouldn’t leave us alone with the questions… it seemed harmless at first. Where are you from? The basics. But, when we refused to come with him to his Nubian village the conversation took a turn for disgusting. We had already decided to head back at this point (ice creamless) but we still had a ways to go. He asks if we wanted to BE with an Egyptian man. We told him we were both married (lies) and our husbands were on the ship (more lies). This did not deter him though. Do you want to kiss an Egyptian man? Um… let me think… no thanks. At this point we were practically running when we were asked this gem. What about BUM SEX? Excuse me WHAT?!?! That is so not okay. NOT OKAY! Ew… What was his thought process? Oh, so they are married and said no to a kiss, but bum sex, oh yeah, they will totally go for that… Ugh.

We made it back to our ship in one piece but were a little concerned about leaving our tourist bubble again that day. The Egyptians were mostly wonderful to us but I guess you can’t win em all.

On our last day of the cruise we were both very ready to leave Luxor but not before checking out the largest temple in existence, the Temple of Karnak. It was contributed to by many pharaohs but I believe the main hall was built by the father of Ramses II. 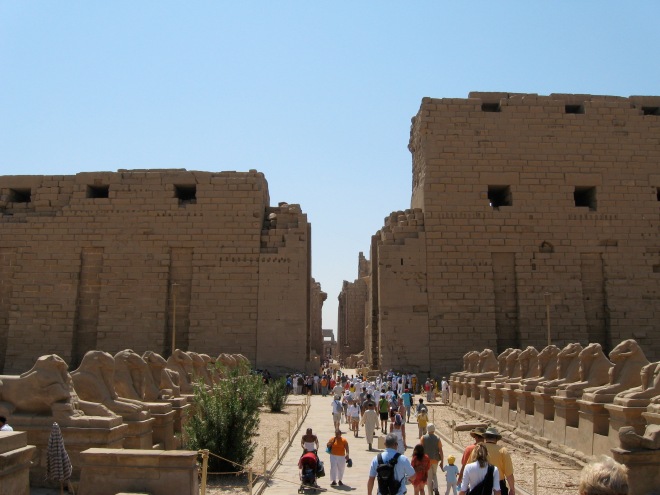 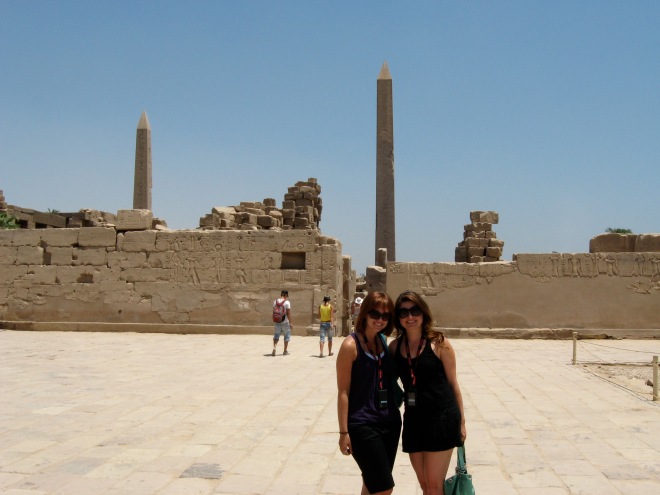 Then we continued our jet setter status and boarded a flight back to Cairo in time to check out the Sound and Light show in front of the Great Pyramids of Giza.

On our last day of the tour we thought it was time to visit the Great Pyramids and ride camels… because when in Egypt. I even got to stand ON THE PYRAMIDS! 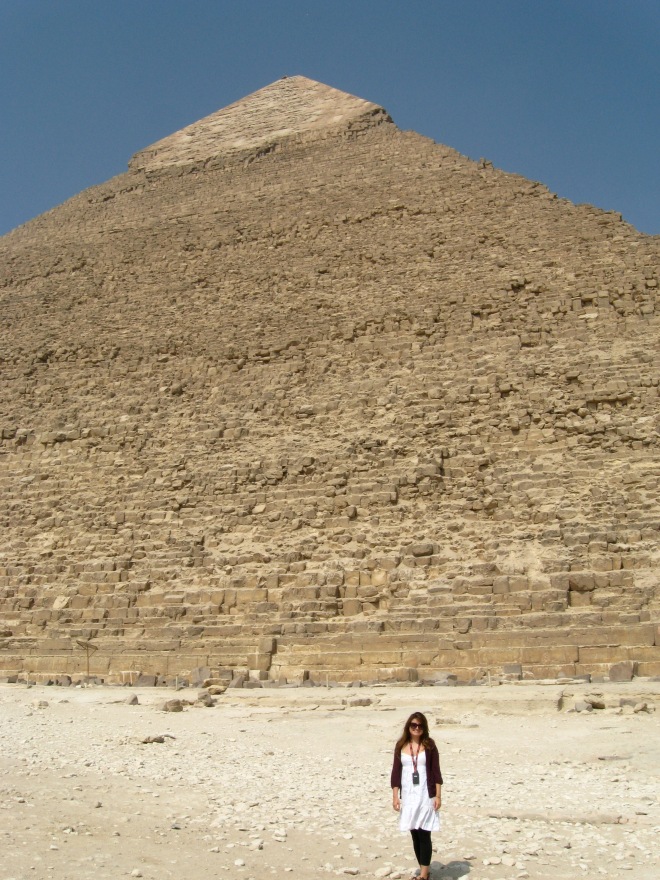 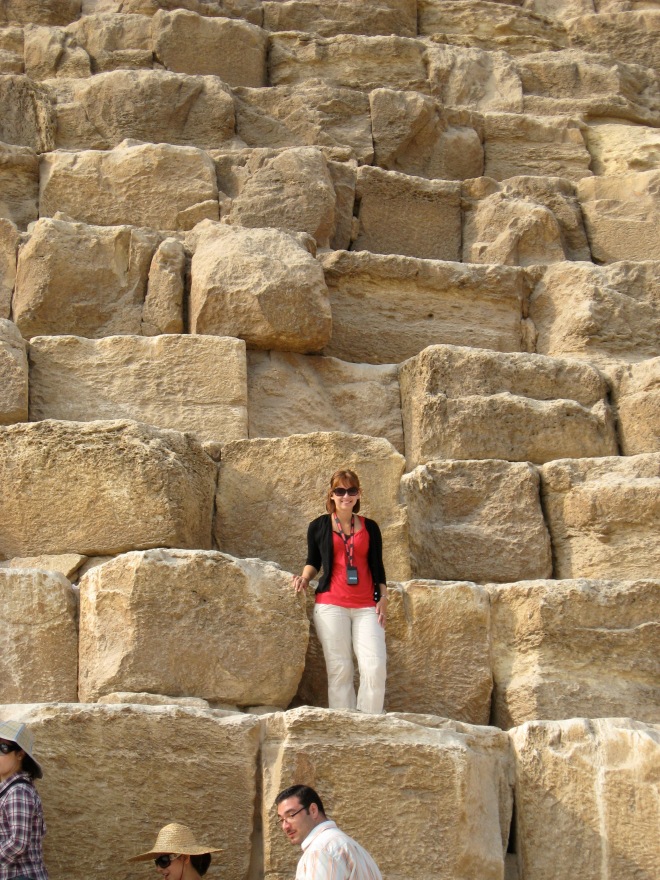 Then we drove over to the ancient capital, Memphis and saw the colossal status of Ramses II. Man this guy built a lot of stuff.

Then we ended the long morning of touring at Saqara where we visited the Museum of Imhotep. We saw a real mummy as well as the oldest stone structure ever made, the Step Pyramid of Djoser.

We ended our last night with a very authentic meal at the Hard Rock Cafe… okay… maybe not so much. But I missed salad with actual green vegetables. Okay… now I almost left out the end because sometimes I can’t believe it even happened. But, on my flight home, I was somehow, magically upgraded to business class. Like full on, reclining into a bed, unlimited champagne business class. It was a dream flight from London to Seattle and I was having such a great experience that I didn’t want it to end. There was so much sleeping to do and movies to watch and yummy chocolates to eat. That was likely the first and last time that I will ever fly business class. But, sometimes I still hold my breath when boarding the plane in the hopes that something magical will happen again. The perfect end to a (almost) perfect trip!

So that’s The Best of Egypt in one incredibly massive post. It really was the BEST trip; Stef and I still talk about it all the time. It wasn’t cheap but it was worth every penny.

What’s the best trip you’ve ever gone on?